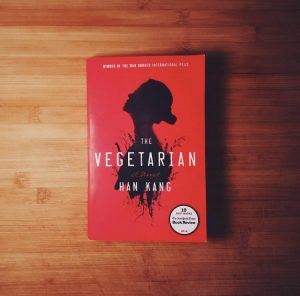 Easing into the spooky season with The Vegetarian, a fabulously unsettling weird fiction novel. This one is certainly gothic adjacent rather than full throttle rotting castle. But if you’ve been following our reads, you should know by now that we love what lies on the edge of the gothic genre.

As with much of weird fiction, The Vegetarian is somewhat slippery to summarize. Yeong-hye decides, after a bloody series of nightmares, that she is going to stop eating meat, which outrages her family and ruptures her home life. This simple decision marks the beginning of her full blown transformation, in body and in mind, into a plant. We follow the decay of her societal humanity as she gradually abandons all desire to conform to any role or expectation. We see her transformation second hand, narrated to us by three members of her family, rather than from Yeong-hye herself.

If there is a specter that looms and haunts the characters in this book it is undoubtedly the Body. Kang writes about the body as if it is the source of all brutality, forever unknowable to her characters, a void of grotesque horrors that constantly haunt regular life. It distorts and decays at its own whim, it controls and changes them, and while they may not realize it, the characters are entirely passive to its will. Except Yeong-Hye; she embraces it.

This book opens a can of worms that can neither be put back nor organized neatly into comprehension. But it will most certainly leave you unsettled…