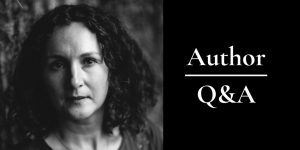 Kali Napier lives in Meanjin Brisbane, on unceded Yuggera land. Her short fiction has been published in anthologies, literary journals and magazines, including The Dark Magazine and Trickster’s Treats #4. She is the author of the novel The Secrets at Ocean’s Edge, published in 2018 by Hachette Australia and Little, Brown Book Group.

I feel there is a sense of displacement in time and place at the heart of Gothic literature. Almost like the past, present, and future are stacked vertically, but their layers start to peel apart, releasing whatever has been trapped: ghosts, shameful secrets, viruses – things left unresolved, only to return in more menacing form.

How do you feel Let Shadows Slip Through fits into that conception of gothic literature?

My story draws on female Gothic traditions, with the main character’s sense of confinement created by the patriarchal violence inflicted by the family law system, domestic abuse, and some police attitudes towards domestic abuse and child custody. The main character experiences a sense of dissociation because of what she has lost. The layers begin to peel apart of what’s real and unreal on this brief road trip home.

There are three influences for the piece. The first was a story by Kate Mosse called “The Yellow Scarf.” I was struck by the idea of the setting, or a building, being the ghost. The Hampton Arms in Greenough Hamlet is an old (for colonised Australia) inn that still does a cup of coffee and ham sandwich. A Twitter conversation prompted me to consider it as the setting for a ghost story, as Greenough Hamlet, near the coastal town of Geraldton, used to be a thriving community, but most of the buildings now lie in rubble. It is a desolate, windswept part of the world. Trees grow at a ninety-degree angle, dead parallel to the parched ground. And the sun throws long shadows. The third influence was my own experience of road trips back home to Geraldton with my young children, stopping at the Pinnacles along the way. Though basking in full psychedelic sunshine, these rock formations create an eerie, moon-like landscape, and the erosion of sedimentary layers over time is stark.

“Let Shadows Slip Through” came together as a story when I attended a workshop run by Dr Angela Slatter, with whom I have since continued a short story writing mentorship.

All my fiction takes place in realist settings. I am not sure if it is a lack of imagination for secondary worlds, or that there is enough of the unseen and the unexplained in this one to work with. Apart from my first fictional effort of a historical Gothic novel set in colonial Kolkata (I lived in Bangladesh for a few years), my stories are set in Australia. My characters are usually descendants of Anglo settlers, and there is an uneasiness in that identity and sense of belonging that I feel can be expressed through the Gothic. “The Yellow Scarf” by Kate Mosse, mentioned above, sparked my thinking about how the Gothic is characterised by palimpsest landscapes. These contain not just the material remains of past architecture but the energetic imprint of structures and ways of living that no longer exist. In Australia, there have been a deliberate and violent policies to erase and build over Indigenous knowledges and connections to Country.

Ahhhh. Among other things, 2020 has thrown a spanner in my writing process. I am not someone who can write anywhere, anytime. I must be at my computer in absolute silence. However, since lockdown I have been working my day job from home, and the last thing I want to do is sit at my computer for a minute more. I didn’t write any fiction in the first half of 2020. But I have found my way back to it through longhand in exercise books, away from my desk, one small section of story at a time.

I am particularly excited about an Australian Gothic short novel titled Flyaway (2020, Tor.com) by Kathleen Jennings. It is quintessentially Australian in sensory detail and proves that here the Gothic breeds in the sunshine. The author draws on fairy tales and folklore supplanted from other cultures, while alluding to the blood-soaked land that underpins all colonisers’ attempts to impose and maintain boundaries. Her prose is lyrical, perfect, simply a joy to read. Another author whose work I am excited about is Lisa Hannett. I have just read one of her older short story collections, Bluegrass Symphony, which is filled with some of the most unique, distinctive voices. She writes extraordinary scenes that simultaneously hold beauty and terror.

My “favourite” horror movie monster – in terms of scaring the bejeezus out of me – was the girl in the well in The Ring (American remake). But I have recently been slaying some inner demons and felt compelled to watch the film after nearly twenty years. When I realised that she tapped into long-held fears and anxieties of mine, she no longer appeared monstrous.

The creepiest horror movie monster I have never watched is the kid from Let the Right One In. I have only read the book – squinting at the pages and skipping a whole heap ahead to see how scenes turned out. I will not be watching the film adaptation.