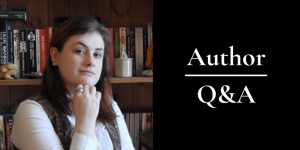 Holly Kybett Smith is a queer writer based in the south of England, who specialises in all things dark, whimsical and weird. Find her on twitter: @h_kybettsmith.

We often feel that some of the best Gothic literature happens outside of the gothic genre. If you strip away the tropes and the familiar imagery, what do you feel is at the heart of Gothic literature?

When I first read over this question, I was tempted by a simple answer: “The Gothic, at its core, is a sense of entrapment.” The more I thought about it, however, the more I realised that the Gothic is its own opposite: not only a sense of entrapment but, equally, a sense of being locked out. Gothic stories play so often with characters who don’t belong. Characters who are isolated, be it by the walls of an eerie house around them or the conventions of a society that doesn’t want them or by another character who wants to keep them like a bird in a cage. There are always walls, literal or metaphorical, and there is always a tension which surrounds them: a desire to be on the other side of those walls, and/or a fear of what might be lurking there. In my opinion, therefore, to be a protagonist in a Gothic work is to be a thorn under the skin. You do not fit. You do not belong. Despite this, you cannot escape your predicament.

How do you feel Ephemera fits into that conception of Gothic literature?

Within the Gothic literary canon, there has always been a strong relationship between the natural world and the manmade one. They are, in a sense, each other’s foils. We see it in Frankenstein’s descriptions of the Genevan mountainside; a sublime beauty which makes the Creature appear only more of a blight. When I wrote Ephemera, I wanted to explore the uneasy feeling that comes with being a human on a planet humans are actively harming. There isn’t a focus on literal walls in the story, but on the walls we create by making our own home inhospitable to us. Inventions like plastic – a single shred of which may take a millennium to decompose – remind us of our own mortality, as we realise we are made of frailer stuff. Meanwhile, advancements in tech make us arrogant and quick to forget. Many of us are afraid of what the future holds: not just our future, but the futures of the next generation and the next. And one of our biggest cultural fears – which dates back as far as humans do – is the fear of being forgotten.

It is scary to be temporary, to be ephemeral, though that is our reality. We want to make our mark on the world first, to last longer than a fish or a piece of driftwood, but there is terror in that too: terror that the marks we leave may be scars; that the only way to live on is through the havoc we wreak. To link back to my previous answer, in Ephemera, we are the thorn under the skin – but we are also the hand that stabbed it in.

I initially wrote Ephemera for a module I took on horror writing in the second year of my creative writing degree. This was in dreary English January, when it grew dark outside by 4pm, and it was cold enough for me to see my own breath in my bedroom in the mornings. Many of the discussions we had in those classes – and afterwards, sitting around a little table in the classroom while we waited for the rain outside to stop – were instrumental to the building of my ideas. My lecturer, Dr Claire Gradidge, had some fantastic advice. (Thanks, Claire!)

Knowing I would soon be writing something dark, I began collecting shards of the macabre like shiny little treasures. I went into deep-dives on Wikipedia; read articles about severed feet (which really do wash up on beaches!); sat with lots of creepy poems and short stories, and discovered The Magnus Archives, a fictional horror podcast which has fast become a favourite. I also read a great deal. I think it’s really important to read widely, not just within your genre but anything that comes to hand, as you never know which source will yield the next unsettling detail. To this end, I keep a pocketbook where all manner of imagery, thoughts and ideas get scribbled. It’s in this book that most of my stories – novels and short pieces alike – first take root.

Place and region will always be instrumental to the stories I craft. Whether I am writing a lush historical story or a chemical-choked sci-fi, I will always seek to pick out details of the setting first. The places we grow up in shape us in all sorts of tiny ways, so it stands to reason that I, as a writer, should consider how a setting might affect the mindset of my characters. I personally grew up on the southern coast of England, kicking pebbles along beaches and gazing out of car windows at winding country lanes. An only child, I liked to set my daydreams in my own surroundings, to keep me company as I went about my day. As a result, a lot of the set-dressing in my stories is borrowed from the places which fascinated me growing up. I’m particularly fond of grubby pavements; run-down amusement parks on run-down piers; 19th-century buildings green with water damage; wild beaches; and rolling green hills.

In Ephemera, my love of beaches takes central stage – though it is upstaged, I think, by my fascination with ruins. The church on the Crest of St Francis does not actually exist, but it was inspired by a whole host of similar ruinous, half-submerged churches. Two of my favourite examples are the mid-16th century Temple of Santiago, in the Grijalva River, Chiapas, Mexico; and the steeple of a 14th-century church in Lake Resia, South Tyrol, Italy. Photographs of both are what got me thinking about the eeriness of places the world leaves behind. I have never visited them, however. Perhaps one day…

I pace a lot.When I’m writing from home, I’ll get up 2-3 times an hour to wander in circles while I’m mulling through ideas. I talk to myself, too – so long as no-one can hear me! – and growl and make funny noises when I’m thinking.Sometimes, a change of scenery helps the words come out, and I have been known to spend hours lurking in the dark corners of cafés. My favourites are the ones with the most old-fashioned décor and the squashiest chairs.

I recently tore through White Is For Witching by Helen Oyeyemi, whose prose is delightfully inventive. I can’t wait to delve into her other works, which I hope will bring me joy over the long winter months, with a blanket in my lap. This summer, during lockdown, I’ve been steadily devouring the bibliography of Laura Purcell. She has a gift for weaving dark uncertainties through her novels, which have hair-raising implications whichever way you look at them. I’m sad to say I’ve almost read them all!(On that note, I am always on the lookout for recommendations. If anyone has any, don’t hesitate to send them my way!)

Natasha Pulley’s novels, too, have been a wonderful distraction from the pandemic. I was lucky enough to attend her author event at Mr B’s Emporium in Bath just before lockdown was enforced in the UK. She spoke about all sorts of fascinating things, including yūrei, which is what inspired that particular tangent in Ephemera.

It has to be the Pale Man from Pan’s Labyrinth. No other movie monster I’ve seen has managed provoke such a visceral, full-bodied “NO!” response from me. In both concept and execution, it is brilliantly nightmarish, and I still can’t really look at it. A close second, though – and this might be more surprising – is the Nothing from The NeverEnding Story. It didn’t translate especially well from book to film – the pure absence of matter is a hard concept to illustrate in visual media – but I remember reading Ende’s descriptions of it as a child and feeling an implacable dread.